This recipe for summer spaghetti threw me off a bit. The sauce is referred to as a gravy. Which it is, but using chicken stock instead of beef. But it was really weird to think about spaghetti in gravy.
Anyway, I obviously got over it and made the dish.

The first step was to make a marinade for the chicken and marinate 20 minutes or overnight. Of course I chose neither. I marinated for about an hour and a half.

The next step was to cook the chicken and set it aside.

While the water is boiling for the spaghetti, the gravy is started.
Melt the butter and olive oil in a pot and add the garlic.

After the garlic becomes fragrant (when is it not?!), the flour is whisked in.

After that comes the chicken stock. For me, it took a little while to thicken.

Fresh basil is then added to the gravy. Then the cooked spaghetti is added in with Parmesan, chicken and the tomatoes. 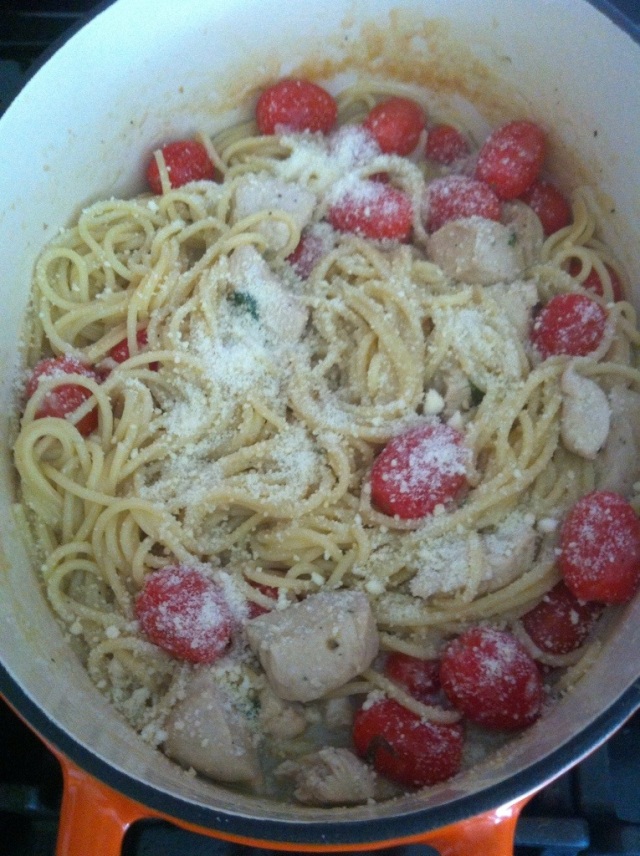 The final product was really tasty. I wasn’t expecting it. That gravy word threw me off.
Adrienne (see her guest post on white cake) was over for dinner and she quite enjoyed it. Chloe’s bowl was empty (mind you, she did not have any tomatoes) and Matt also enjoyed the dish. I will make this again. The only thing I would do differently would be to add more basil. I couldn’t taste it.
But I’m already planning on putting this dish into an upcoming weeks meal plan. It was so good!